Fuzzy Fogginess: Or Wow These Pain Meds Are Awesome!

I know awesome is my favorite word right now. I'll work on it. :) My son goes through phases where he has something he'll use repeatedly: "not to mention" and  "true" "being two examples readily brought to mind. Also, he says he's "not built for speed" and he's "studied your moveries." Ah, my sweet boy! He says his catch phrases repeatedly throughout the day, whether they fit or not, so maybe he comes by it naturally. He still pops out with them on a regular basis but they're not being used with the frequency that I'm using awesome lately! :-)

Honestly, though, I'm in this kind of mental fog right now, from the meds I'm on. I'm not in the horrendous pain I was yesterday morning, thankfully. It leaks through, some, the pain, but the steroid shot yesterday has helped and I started the prednisone pack today. But I can't really focus my attention, which kind of freaks me out some, as I'm usually hyperfocused and on a mission. I've got things to do, but no ooomph to do any of it. And that's after my second giant cup of coffee. I can roll with it and be grateful for the pause or push against it and try to accomplish stuff. Since I had been pushing against the back over the last week, though, and ended up not even being able to put my own pants on, I think I will sit here in my recliner and embrace fogginess and scifi movies. I don't think I'm up for anything else, honestly.

No geek camp of the documentary kind today, as Rick is home. We're planning on recreational geekfesting: watching the 5th and 6th Harry Potter films and The Lord of the Rings trilogy somewhere over the next four days. With the way the girls watch movies (unless it's a mesmerizing cartoon), the kids will get plenty of movement and it won't be a passive activity, there will be lots of chattering. One of the reasons I love to watch with the kids as television watching as long as it's not sponge bob is that it's dynamic and filled with the opportunity to discuss things. It's an excellent social skills training tool.

Last night's recreational geekfesting with Lucy in my lap: 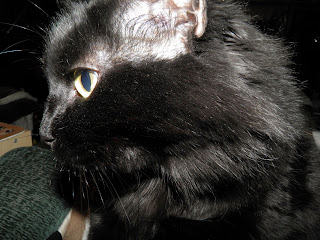 and Animaniacs on the tv: 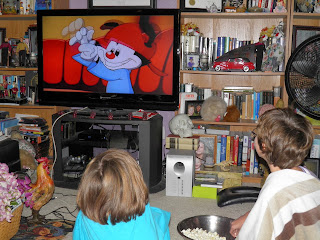 Popcorn!
I hope everyone is done with their shopping, ready for Christmas, and minimizing their stress. :-)
Crafted for your viewing consumption by Kim Wombles

MIL - she lives next door - is coming over tonight so we can do the last minute groceries - 24 here, 25 next door. Parents on the 26/27 (after supper), usually to the 28th but the eldest has Scout camp 27-29 so we need to get him home for atleast a day of it. If my bro hadn't flown in, I probably could have convinced them to come here instead. Luckily Mother wasn't home when I called... Dad was so he can tell her instead.

I keep hoping the wrapping fairy would come and get the Xmas stuff wrapped for me but no luck so far... I need to start it tonight or I'll be up all night on the 24th. I HATE wrapping... what's wrong with the plastic bags things came in??? Not joking, I use to do that too... can I blame it on being a "no you are probably the one with Asperger's, he has mild NLD w/ a S/L delay"... not that it matters :) (That's the extent of my "dx"... yes, I probably tick all the little boxes... do I care... No)

Sounds like it will be busy there; Christmas day we'll walk across to my parents for dinner, but otherwise, no plans requiring any travel.

I know exactly how you feel. I hate wrapping. I finally got the gift bags (although I still have to put the stuff in the bags). I'm with you, what's wrong with shopping bag you brought it home in?

I'm hoping the pain ends soon-for good! ((())) but sometimes being in a fog is a nice thing..especially when it happens during what is supposed to be a relaxing time..The movie choices sound great..My kids are doing the usual..playing in the snow watching movies..running around like loons as Christams is just a day away...I plan on drinking lots of rum laden egg nog and enjoying it all..:)