William Shatner Rules At Our House

Several months ago, Rick and I decided it was time to introduce our girlies to the magic of Star Trek. Hee, I laughed out loud there as I finished typing that sentence, just so you know. Oh, now, they knew about Star Trek; we usually do a Star Trek tree when I bother with a tree. 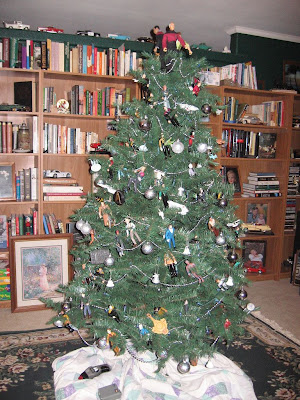 References to Star Trek permeate our conversations and always have. Science fiction is a huge part of who Rick and I are; sci fi and comic books blend well together, and well, sci fi shows, movies, books, and comic books have been a major chunk of how we spend our time together. Along with Star Trek (which rules above all else), Stargate, Star Wars, Battlestar Gallactica, Quantum Leap, Farscape, Firefly, Eureka, Sanctuary, and Warehouse 13 are talked about often and watched eagerly and gleefully. We've got the books, the comic books, the soundtracks, the dvds, posters, the TOYS and more. The girls could no more escape it than avoid breathing is what I'm saying.

Anyway, several months ago, we began to watch the movies of Star Trek (beginning with the brand new Star Trek reset) and we stopped at The Undiscovered Country. We warned the girls that they really wanted to go back, see all of classic Trek and at least some of TNG before moving forward, that watching Generations would make them cry because Kirk died. It was bad enough when Spock died, you know? And we watched the next film the next day so they didn't have long to worry.

In other words, I've managed to stave off watching Generations for several months despite their repeated asking to watch it. We've made it through almost all of seasons 1 of both the classic Trek and TNG, we've started both DS9 and Voyager, we went through two of the Star Wars movies and the awesome Spaceballs, all of the Superman movies, even seasons 1 and 2 of The Animated Adventures of Batman, and Pinkie and the Brain. And dozens of Get Smart episodes.

Until Saturday night when I finally capitulated and we watched Generations and I had girlies bawling at the beginning of the movie when it appears that Kirk has died and girlies crying at the end of the movie when Kirk really dies. Oh dear gods. And of course, me crying throughout as well, because he's Kirk, damnit! Of all the characters, Kirk is the girlies' favorite. They adore him. They love Spock; they've got a thing for McCoy and love to practice saying, "He's dead, Jim." But Kirk is IT.

Rosie was devastated. Such boo-hoos and quivering lips like I've never seen. We immediately turned on an episode of Shit My Dad Says (the girlies call it Stuff my Dad Says) at her request so that she could see Shatner and that he was okay. I even offered to tweet Shatner for her, but she's shy. She managed to calm herself down by reminding herself that we could go back and watch the classic trek, and me pointing out that the newest movie rebooted the whole thing, so chances were, he never died that way anyway.

Lil seemed to handle it somewhat better; she didn't cry as much or get as upset initially, and I pointed out to her that there were books written by Shatner that picked up after that and had the Borg get his body and bring him back to life, where he and Picard and old Spock saved people and had grand adventures. At ten or so, though, after Rosie was sound asleep, out came Lil with tears streaming down her face, saying she couldn't get over it, why'd he have to die. Sigh. I warned them, didn't I, for months that this would hurt to watch and we should put it off for as long as possible?

I took her over to the bookcases where the Star Trek books are, and I started pulling the borgified Kirk books off the shelf, showing her the covers and how many adventures he'd gone on to have. She was delighted to see Shatner's picture on the back, to see his name as the author and immediately wanted to start reading them. I pointed out that she had over a hundred classic Star Trek novels in front of those she'd need to read first. She settled on the fifth fotonovel, having read the first four and wandered back to her room, her nose already in the book.

Knowing Lil, she'll push to read the books by Shatner sooner rather than later. And I'll undoubtedly deal with more tears as she learns to navigate fictional worlds and separate the real world from the fictional. There's a book All I Really Need to Know I Learned From Watching Star Trek, which of course, I own. There's a lot to be said for that. Star Trek deals with important philosophical principles and offer tremendous opportunities for discussing how we treat other people, how we see people who are different from us, how we deal with adversity, challenges, death, relationships. There is much that is painful to watch, but what sci fi gives is worth the price of admission. And these shows provide incredible opportunities to talk about all of these things with our three children.

We get to spend time together as a family, we get to laugh and cry and talk about the deeper meaning of life, why people do the things they do, and we get to do it, in large part, thanks to William Shatner's work.

And have I mentioned, they love his CDs?

This is their favorite song.

Now, excuse me while I go tweet William Shatner. :-)
Crafted for your viewing consumption by Kim Wombles

A Star Trek tree! That is amazing, I love it!

And it's so sweet to read how much your girls love William Shatner. My eldest little guy loves Star Wars, and his little brothers tolerate it. Cai hasn't discovered Star Trek yet. My sixth sense tells me if I showed him the films, he would be hooked ... like he is with so many things!

Right now we'll settle for the way he proudly wears underpants that say "May the Force Be With You" :D There is plenty of time for him to join Rosie and Lil in learning to say "He's dead, Jim" [that made me giggle!] :)

You listed practically every tv show and movie that I love love love. Sad to say I am totally alone in my house when it comes to these shows, but they understand me anyway.

But I can get them to watch Spaceballs and Serenity.

Thanks, Kate. :-) Yup, plenty of time. The classic Star Trek is easier for the girls because the bad things that happen aren't graphic, but it's still, no matter what series, an intense ride, and they get heavily invested emotionally. We try to tread lightly with it. No Firefly, BSG, Stargate, Sanctuary, or Farscape for the girlies yet.

Elise, Spaceballs has to be one of the most fun movies of all time. I can no longer watch Star Wars without overlaying Spaceballs onto it. :-)