Most the blogs here usually relate to autism, to AoA, or to other woo out there. I've begun, though, to pretty much put whatever suits me here, since placing the separate interests on other blogs tends to mean they don't get read. I've been testing, over the last month or so, placing those other things here as well, and since it doesn't look like it bothers anyone to have most the pieces of me in one place, it is what I'll do for convenience sake from now on.

I think the name Countering Age of Autism still works regardless of what's on here, simply because whatever it is remains foreign to what AoA would do. I keep reconsidering the name, though, thinking on changing it, but I keep coming back to the fact that AoA isn't getting easier on anyone's eyes; they seem to get more extreme by the day and very little of what they write on has anything at all to do with autism whatsoever. Unless readers think there's a better name for this site than Countering Age of Autism, that's what this blog will stay. You just get to read about all manner of things in one place. :-)

And so, to prove that, here you go: the flotsam and jetsam of my mind this Saturday morning:

I am through with being a student, at least for a few months, but I will teach through the summer sessions, so there'll be less time spent studying for classes and more time in my garden and with my children, and in digging into autism related research. It feels weird to have the semester done, and I feel itchy in my skin, restless.

I've grown accustomed to being busy all the time, and it's been a weird experience over the last couple years as my role as primary 24/7 caregiver has downshifted to being needed far less by my children. The bright boy, for the most part, is settling into his adult life, going to the center 4 days a week now, and one morning at the local SPCA cleaning the cats' cages and rooms. He loves it. We still face significant hurdles in communicating with others (especially others he should be comfortable with) and it can cause some serious difficulties. We continue to work on it; being able to communicate is important, and he refuses to wear the id bracelet identifying his autism, so I have an added layer of worry. My girlie-girls are bundles of issues, but I'm relieved that a fair share of those issues are related to perfectly regular pain-in-the-rear kid behaviors. We're working on those, too. Still, they want and need my attention much less. When the lion's share of your adult life has been spent completely immersed in caregiving, having that demand removed is oddly confusing.

It's not gotten any less out-of-body feeling, either. I don't know how to sit still and be. I don't like empty time. It isn't just the kids not needing me as much, it's the way the flow of time changes as you age. Semesters are over now before I'm mentally prepared. I just spent two semesters studying chemistry and anatomy and physiology and just like that, the study is done. I wasn't ready. I'm not ready for the three classes I'm teaching to come to an end next week, either. I'm not done teaching, you know? That's alright, I guess, as I get a new bunch for the minimester starting next Saturday, so I'll just start all over again. But still, I really wasn't done with this batch of students or these courses. There's so much to teach, so much to share, so much to learn. And I really enjoyed these three classes. They weren't perfect, but they were as close to it as I've gotten, and I was in the flow for most of it. Sheer bliss; you can't reach all of your students, but I reached some. I read some awesome papers, saw the potential growth of some kick-ass woo fighters in my comp class, and I thoroughly loved the class. And it will be over on Monday, and I am saddened by that. That's okay, since I have their last six-page papers to grade this weekend, by Monday, I may be glad to call it done.

It's those papers I'll be attending to this weekend, getting that class ready to be put to bed. AoA is doing the same old stuff, having conniptions over the pig virus found in the rotavirus vaccine and trying to blame Offit for it, as if he has anything to do with the manufacturing of the vaccine. As if the vaccine has anything to do with autism. My thought is, their special brand of crank isn't going anywhere, so taking a brief respite from dealing with their nonsense won't hurt any of us and may be a wonderful thing. The hub-implosion isn't going anywhere, either. My thought on that is link to the blogs you like in your blogroll and we'll create a beautiful network of interrelated blogs all on our own, our own personal hubs. Less drama, certainly, to be had that way. My last thought to share for the day is that if it's nice where you are, it can't hurt to get out and look at flowers. 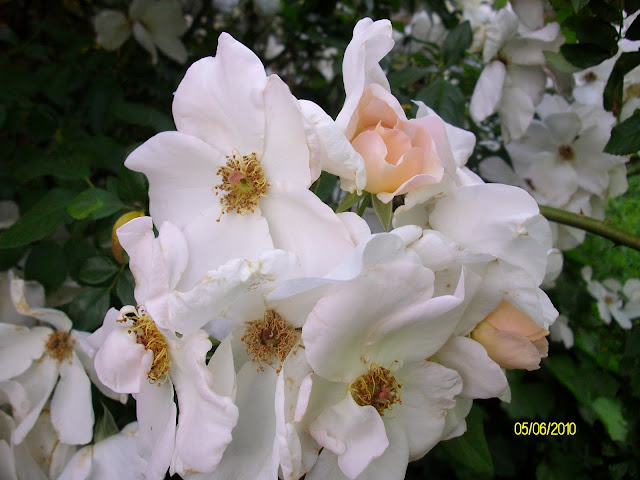 Lovely..yes, it is weird to be in a place where your children aren't so all consuming of your time. It is wonderful and yet so very hard to watch them grow up..to let go..and as much as I think I am ready..I find myself saying "grow up" while at the same time trying to pull them in..parenting is the ultimate in contradiction sometimes..As for having time to fill and keeping busy..Kim Kim Kim..as if you won't be hot on the trail of learning, doing exploring something new..all while taking time to look at the flowers..ha! ;0

http://autismohub.blogspot.com/p/autism-hub-blogs.html
The autism blogs were hijacked and placed here. What little I've read on it, I don't think it was done with anyone's permission.

When I had my blog I posted everything and anything... problem with that I discovered that sometimes it was TMI or that maybe I shouldn't have posted that... So I went back to paper.

The lilacs have bloomed 2 weeks early here in the Flower City. They'll be past-peak when the Lilac Festival finally rolls around at the huge park where it's held. Probably hundreds of varieties on display, from white to deep purple. I ought to go see them soon.

So true about how the flow of time changes as you age. When it makes no difference what day it happens to be, when there's nothing on your calendar that requires your presence, the days and weeks merge into a nebulous cloud of time.