Here is the truth: we will be divided as a country not because people supported Trump while others sounded the alarm bells but because of what underlay those alarm bells. Trump’s candidacy and presidency show that at least 1/5th of our population isn’t against racism, bigotry, discrimination, hatred, religious intolerance, the abuse of the disabled, or the harassment, assault and rape of girls and women (and boys and men). It is because of these reasons, not the president himself, that the schism in our society will fracture us to our core as a nation. 60 million Americans voted their preference for these rotten principles because they believed it was better than a Democrat. Let us pray that Alabama voters will reject Roy Moore and all that he stands for.
Crafted for your viewing consumption by Kim Wombles No comments:

When voices go silent because hate and threats overwhelm those who dare to speak out, why should we be surprised to see the fall of civil discourse?


Crafted for your viewing consumption by Kim Wombles No comments:

Might as well be a fat, sleeping ginger cat

Asleep, fat, and a ginger cat. Oh how eight years can change a person.

Okay, so not a ginger cat. And asleep and fat is not the biggest change. I don't even want to focus on the ways this disease has fucked me over. It has and it will continue to do so.

In the hours I'm awake and with the kids, my mind is occupied enough to not ask questions with no answers or no good answers. The middle of the night is another story and I end up engaging in circular conversations with myself on how much, how long, and so on a person can stand this mangling of personhood.

It's an intellectual discussion, not one coming from my depression, etc., so there's no emotional component to it. And I always arrive at the same answer: as long as I'm breathing--my kids and husband need me and that means pushing on. Pushing through. No matter how crappy this is.

So, I'll keep on persevering, seeking answers to what this disease is called, knowing it won't make a bit of difference in how I'll feel. There's no fix to so many things. There's only moving forward.


Crafted for your viewing consumption by Kim Wombles No comments:

More than 30 months ago, roughly 900 days give or take, my ability to keep pushing against the barriers my body was imposing on my will faltered, fell, shattered, and our lives have not been the same since. My mother's body had been giving her all sorts of grief for many years but had attacked with a ferocity none of us expected. Learning to live through these things has been challenging for all of us.
We've hobbled along, my mom and I, together through phone calls and visits, commiserating and laughing in the face of this ridiculous roadblock to our plans and we've each pushed and fought and paid the price when we pushed too hard. Many of our ailments are overlapping and I've believed that if we could and did do genetic testing, we'd both have a glitch in the same place causing this. Not that it'd do much good. There's no stopping this train we're on. There's just maximizing the journey.
For nearly two years I've had no words to offer here. I learned to write essays that offered a story, a wrap up at the end with a lesson, a witty line, or closure.
I can't do that any more. There's no lesson in a disease process that defies naming definitively all while attacking one's body in new and novel and often cruel ways and seeing one's mother continually being hammered with greater and greater challenges.
There are no witty lines left. I've lost them. I've battled depression, anxiety and panic attacks for decades and the ways they screw a person's life up when they're winning. I finally owned my PTSD--the flashbacks and nightmares and the inescability of the experiences that created it this past month to the new psych NPs now managing me and my four labels as they move my meds around, attempting to undo the damage people not trained in psychiatric meds did me. So far, I've weaned off one med and am weaning off another this month. Come the end of June, my 49th birthday present to myself is being off two meds that have hampered my ability to take other meds for pain and migraines. In July I will start a long weaning off the original psych med I've been on for eight years plus. In the end, I'll be down to one med that treats the first three labels, which should make the fourth one quieter.
I suppose that could be read as a closure but people with those labels know closure is a joke, a fairy tale, a cruel lie.
Fixing that doesn't fix a body bent on attacking itself. It just means maybe I'll develop wit again. I highly doubt I'll ever find anything really funny about this, but my labels and the med taper may be obscuring my view a bit.
So I'm left here almost at the end of this tasting the bitterness of a raw almond, knowing I've failed the goals of essay writing. No lesson. No witty line. No closure.
If I argue I'm truly not bitter, it will ring hollow, an obvious lie to readers sensing that bitter undercurrent. I am a bit bitter. Things were going well. The kids were doing well, Rick was ok, my job was great and I was where I wanted to be professionally. And truthfully, all I lost was being in the thick of things. Being homebound as an introvert is not a hardship. Mostly. Losing driving isn't an issue when one's too ill to go anywhere. There's no room for boredom with all three kids, seven dogs and nine cats to entertain me.
It took bifurcating my life into my illness over here on its own and my life with my family as far from that as possible. Everyday with my kids, husband, and critters is a damned good day, a victory wrested from an illness that is constantly changing while consistently worsening. My illness doesn't get to make my life sad (even when it does) and it doesn't get to rob me of the joy I find in my teenagers' animated chatter, in the lapful of cats and dogs I get each day and their curling next to me at night, surrounding me like protective talismans. And none shall pass, their protectiveness says.
My illness doesn't get to take teaching from me. It just makes me a better teacher, kinder, softer and a believer in how easy it is for a person's life to go to hell on them with no warning. Deadlines retreat into the distance and the focus of showing care takes precedence. We're all on the same ride, whatever metaphor one might prefer. Mine's a train hurtling ever faster into the pitch dark blackness of a tunnel with no end in sight. Yours might be the roller coaster from hell.
The reality is we're all walking wounded and it will go a hell of a lot easier if we link arms, share adaptive equipment, and hold on tight to each other.
And there's a lesson. Not bad for having had no words at the start of this.
Crafted for your viewing consumption by Kim Wombles 2 comments:

No, Seriously--I Wasn't Joking At All 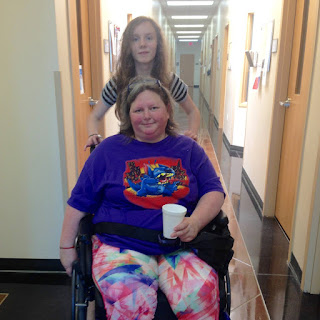 I would break out in a victory dance,
but I'm still new to the wheelchair game.
Haven't got all my moves worked out yet.

It was our trial run, the girls and I, to the college to see how much energy it was going to take for them to lift the wheelchair out of the truck, set it up, and me get into it. And then into the college. We only covered the office area, and we encountered some difficult points, but we did it. We went, we got in, we saw people and talked. And we got back into the truck safely. That's something, my friends. I'm proud of  it and my girls for their help. I couldn't have done it without them.

Crafted for your viewing consumption by Kim Wombles No comments: